Location : left bank of the Rhône, the route runs along the plain between 700 and 1,800 meters above sea level from Martigny to Sierre

This route takes place in 5 steps from the Col des Planches (above Martigny) to Grimentz (Val d'Anniviers). It takes the bisse de Saxon to Haute-Nendaz, the bisse du Milieu and the Grand bisse de Vex to Mayens de Sion, the bisses of Hérémence, Ernaya and Euseigne and the path of the footbridge the Grande Combe to Ossona. The bisses of Ossona, Sévane, Tsa Creta and Vercorin to Vercorin, the bisses of Sarrasins and St Jean (Grand Bisse) to Grimentz.

Link to the full course map

To reach the start of this bisse, take the post bus to the Col des Planches above Martigny (the line is only served in summer and you must book with Post bus to reach the Col des Planches from Chemin Dessus) From there, join the Lein pass and from the pass descend by an unpaved road suitable for the first hairpin bend above Boveresse. The Saxon bisse begins in this hairpin bend (indication).

Once on the heights of Nendaz Station, join the station from altitude 1776 to descend via Pracondu.

Link to the map of step 1

Link to the map step 2

From Mayens de Sion west, continue on the main road (rte des Mayens westbound) to the Mayens de Sion-Bon accueil postal stop (1.3 km). Follow the Bon Accueil road for 150 meters and turn upstream on the Masses road. Follow this uphill road and then a path that runs along a torrent to the old Bisse d'Hérémence. Follow the route to Mayens des Plans (South-West). This route is interspersed with passable roads that must be followed flat, uphill or downhill. Direction Masses covered car park and chairlift of the same name. From this place, leave the road and walk along the parking lot to join the route of the bisse to the Mayens des Plans (route also intersected with roads that must be followed). At Les Mayens des Plans, cross the road and the river (La Dixence) to climb towards the old bisse of Ernaya. Follow the bisse until the junction for the Euseigne bisse (Altitude point 1508), and descend to join the course of this bisse. At the end of this bisse head southwest at elevation point 1145 and then north towards the hamlet of La Crêta and the village of La Luette. At the entrance of the village of La Luette go down towards the river (La Borgne) cross and head north towards the hamlet of Ossona following the route of the Grande Combe footbridge.

This route is not very easy to follow and you have to be very attentive to its route. A free smartphone application like "Swissmobile" is very useful in this case !!! For the schedule, maybe plan a little more on walking time.

From Ossona follow the bisses of Ossona and Sevane and then go up towards the village of Mase. From the village, follow the signs for Tsa Crêta bisse. At the water intake of the Bisse de Tsa Crêta, climb (at the beginning, not very marked path) towards the Rimble, Pralovin and the Le Chiesso mountain pasture. From the pasture, follow the Chemin des Charbonniers in the direction of the Réchy valley, which runs as far as crossing the La Rêche river to reach La Lé and then the Bisse de Vercorin to follow up to the village of the same name.

Link to the map step 4

Location : from Vercorin to Grimentz

From the center of the village of Vercorin, follow Chemin des Fives to join the route of the Bisse des Sarrasins. At altitude point 1282, follow the downhill path in the direction of the "Chalais-Vercorin" road, which you have to cross to reach the start of the Bisse des Sarrasins at altitude point 1158. Follow the bisse to its water intake and climb towards the village of Pinsec. When the path joins the (very steep) road to the village of Pinsec, fork to the left (north) to follow the path towards the village of Mayoux. The route joins the Mayoux road and then the main Vissoie - Grimentz road. Follow this road and at the exit of the village in the direction of Grimentz, in the 90 ° bend (North) go straight up  (West) following the Mayoux road and along the Mayoux torrent to reach the bisse de St Jean. At the top of the village of St Jean, continue by the bisse towards Grimentz. About 700 meters after the village of St Jean, the bisse crosses the main Vissoie - Grimentz road. From the place called Les Fioz, the bisse is under pipes. Continue to climb towards Grimentz following the La Gougra river by the left bank and then by the right bank.

Printing of the complete route 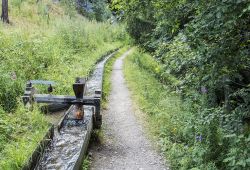 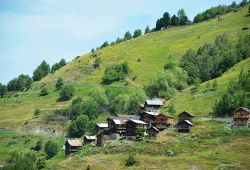 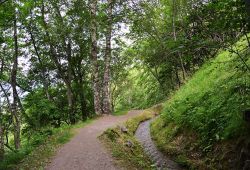 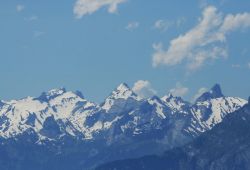 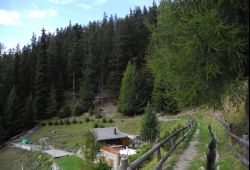 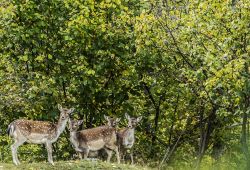 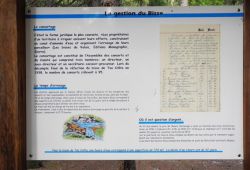 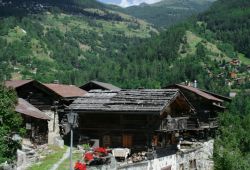 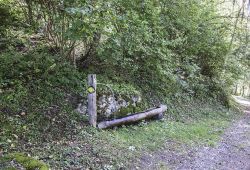 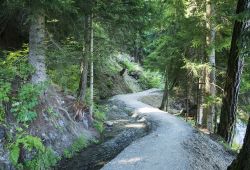 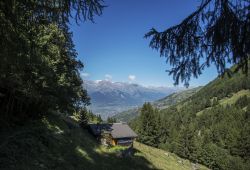 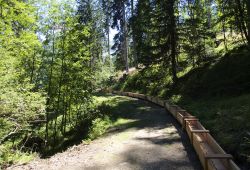 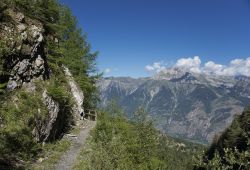 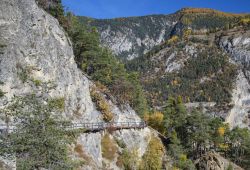